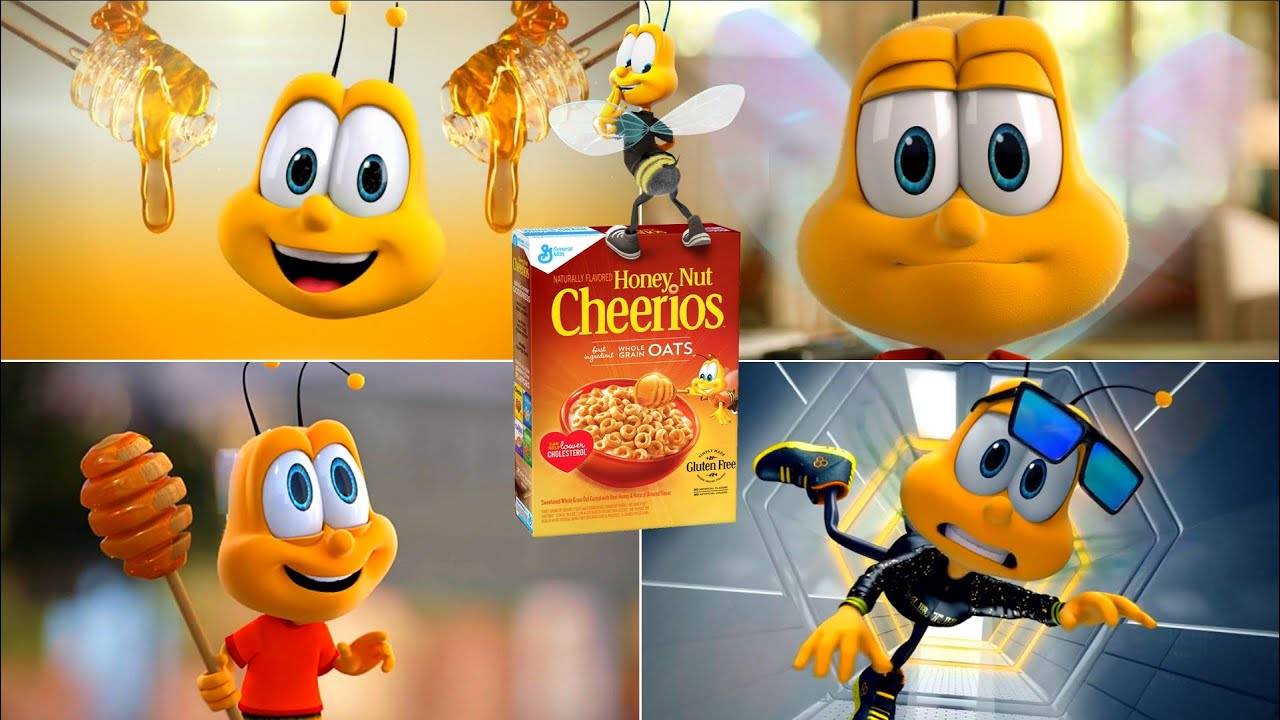 Buzz, also known as the Honey Nut Cheerios Bee, is the mascot of the Honey Nut Cheerios cereal by General Mills. He was first introduced in 1979, alongside the Honey Nut Cheerios cereal. The bee did not have a name until 2000, when Kristine Tong, a fifth-grade student from Coolidge, Texas, won a national contest to name the bee, dubbing him “BuzzBee”. The name was later shortened to Buzz, which was the submission that took second place in the contest. Buzz has also gone through several different voice actors in his career. He was originally voiced by Arnold Stang until 1992. He was then voiced by Hadley Kay, Billy West, Charlie Schlatter, Jason Marsden, Oliver Wyman and Sam Heyn.

Cheerios is a brand of cereal manufactured by General Mills in the United States, consisting of pulverized oats in the shape of a solid torus. In some countries, including the United Kingdom, Cheerios is marketed by Cereal Partners under the Nestlé brand; in Australia and New Zealand, Cheerios is sold as an Uncle Tobys product. It was first manufactured in 1941 as CheeriOats.

Cheerios are made with oats as the first ingredient
Oats are rich in nutrients, like fiber and protein. Cheerios brings the benefits of oats in crunchy little Os, in a variety of flavors you will love.

Honey Nut Cheerios Naturally Flavored has the irresistible taste of golden honey, making it a family favorite. But did you know that each little “o” also contains soluble fiber from whole grain oats? As part of a heart-healthy* eating plan, eating Honey Nut Cheerios each day can help lower your cholesterol. Made with whole grains and low in fat, Cheerios also provides 12 essential vitamins and minerals. That’s something that everyone can smile about!

In March 2017, General Mills announced the Buzz Bee image had been removed from boxes of Honey Nut Cheerios. Images of the new box showed a white empty space where Buzz Bee used to be. Below the image of the bowl of cereal, a plea to “Help Bring Back The Bees” was added. This was to raise awareness of pollinator decline.

WHERE’S BUZZ THE BEE?
Buzz is missing because there is something serious going on with the world’s bees. With deteriorating bee colony health, bees everywhere have been disappearing by the millions and it’s time we all did something about it.

HOW TO HELP THE BEES
Redeem your free seeds and plant! Bees need wildflower pollen and nectar to stay happy and healthy so planting sunflowers, a variety of wildflowers, is a fun and easy way to help the bees.

FREE SUNFLOWER SEEDS
JOIN OUR MISSION! Help us continue to create a bee-friendly world by planting sunflowers!
*No Purchase Necessary. Limit: up to four (4) Seed Packets per person/household. Offer valid until August 31, 2021, or while quantities last. Offer is available for Canadian shipping addresses only.

Bring Back The Bees

Only The Best Funniest Shark Commercials EVER! Cool Shark Ads EVER!