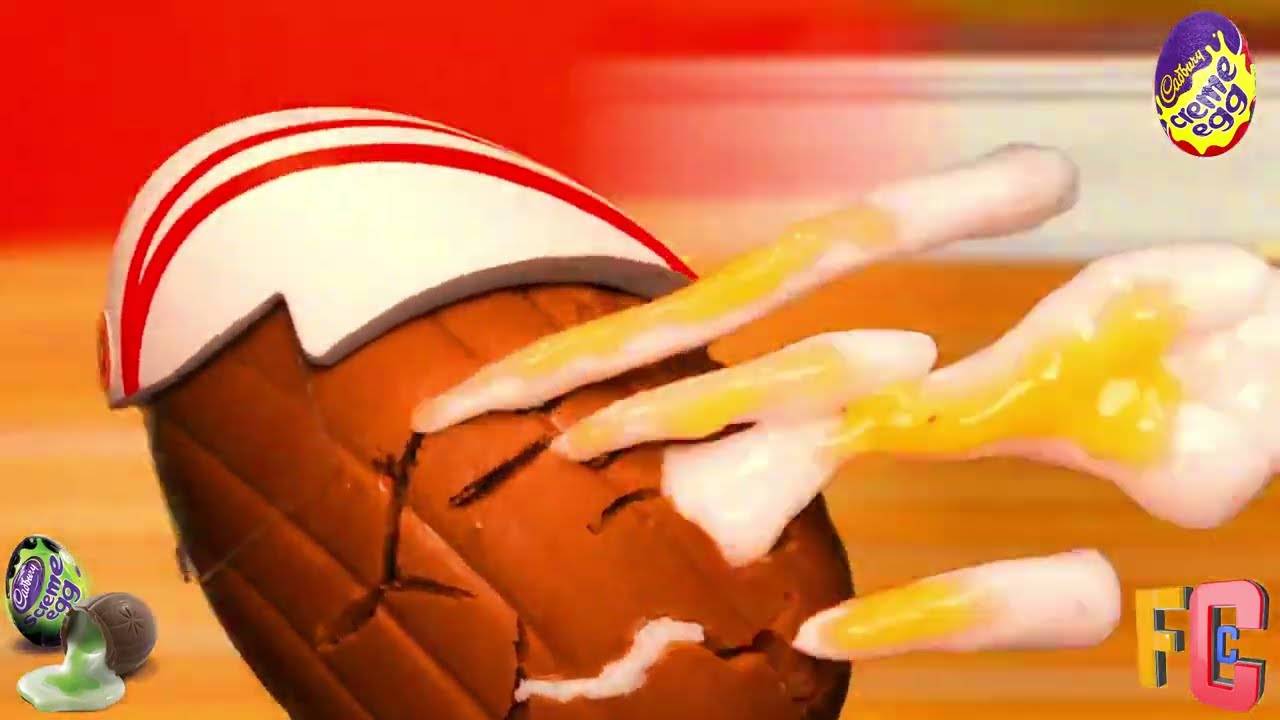 All Cadbury creme eggs Here Today, Goo Tomorrow funny candy commercials.
For the 2009 season, advertising in the UK, Ireland, Australia, New Zealand, and Canada consisted of stop motion adverts in the “Here Today, Goo Tomorrow” campaign which comprised a Creme Egg stripping itself of its wrapper and then breaking its own shell, usually with household appliances and equipment, while making various ‘goo’ sounds, and a ‘relieved’ noise when finally able to break its shell. The Cadbury’s Creme Egg website featured games where the player had to prevent the egg from finding a way to release its goo.

A similar advertising campaign in 2010 featured animated Creme Eggs destroying themselves in large numbers, such as gathering together at a cinema before bombarding into each other to release all of the eggs’ goo, and another which featured eggs being destroyed by mouse traps.

In 2012, Cadbury parodied the Olympic Games by using Creme Eggs instead of athletes. The first advert was 31 seconds long and consists of an Opening Ceremony, performed by stripped and packed Creme Eggs. Each other advert contained a Creme Egg trying to ‘release the goo’ whilst in an Olympic event. An online game was created by Cadbury so the public could play the ‘Goo Games’. Six events were available to play and each of them was shown as a cartoon sketch. It took place between 1 January to 4 April 2012.

A Cadbury Creme Egg is a chocolate confection produced in the shape of an egg, originating from the British chocolatier Cadbury’s. The product consists of a thick chocolate shell, housing a sweet white and yellow fondant filling which mimics the albumen and yolk of a chicken egg. The Creme Eggs are the best-selling confectionery item between New Year’s Day and Easter in the UK, with annual sales in excess of 200 million and a brand value of approximately £55 million.

Creme Eggs are produced by Cadbury UK in Birmingham, West Midlands, UK, by The Hershey Company in the United States, and by Cadbury Adams in Canada.

Choose your Gooey treat from Cadbury, with Cadbury Creme Egg, Easter Eggs, and treat boxes. Cadbury Gifts Direct has a wide range of Easter Chocolate Gifts and Easter Eggs to choose from including all your Cadbury Easter favorites such as Creme Egg. Easter eggs, Easter gifts, and hampers for all the family and friends delivered directly to your door – https://www.cadburygiftsdirect.co.uk/our-product-range/shop-by-brands/cadbury-creme-egg.html