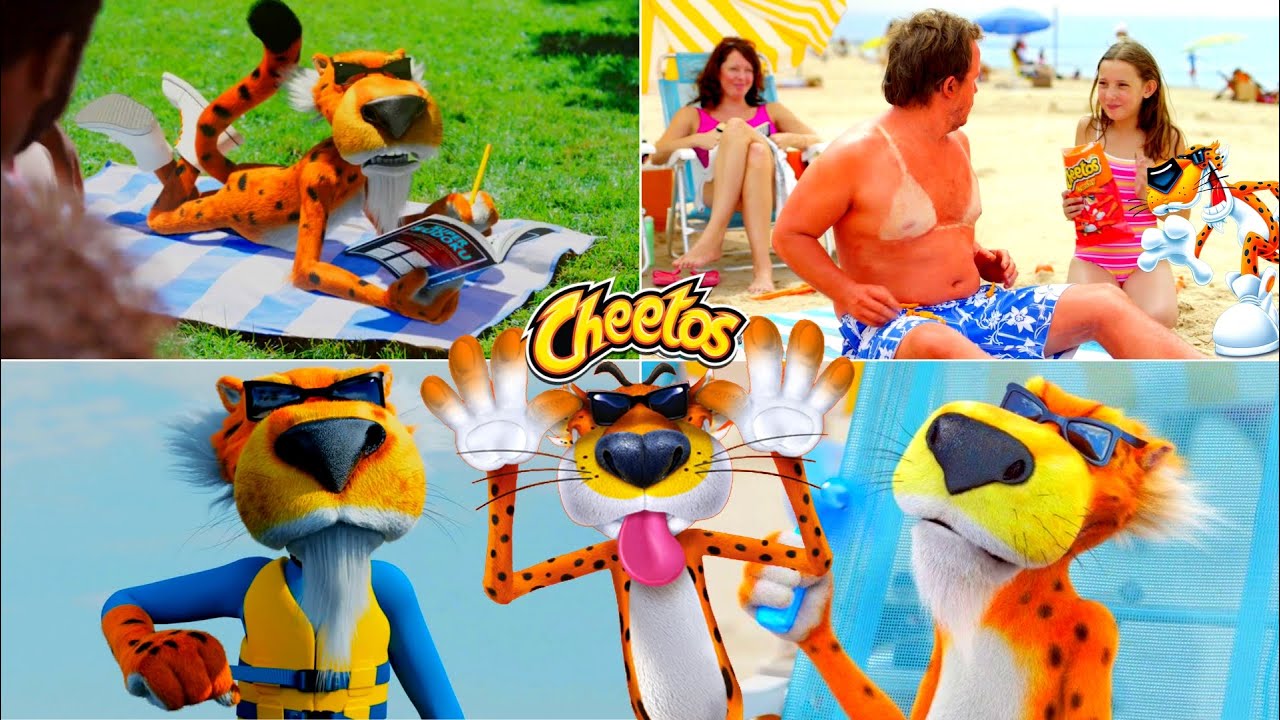 Chester Cheetah Dangerously Funny Cheetos Commercials EVER
Chester Cheetah is a fictional character and the official mascot for Frito-Lay’s Cheetos brand snacks as well as Chester’s Snacks which consists of flavored fries, popcorn and puffcorn.

Cheetos’ original mascot was the Cheetos Mouse, who debuted in 1971 and disappeared in the late ’70s. In 1986, Chester Cheetah first appeared in television commercials as an animated cartoon character. After Chester’s introduction, the sly, smooth voiced cheetah began starring in more commercials and eventually became Cheetos’ official mascot. He used the slogan “It ain’t easy bein’ cheesy.” in the late 1980s/early 1990s, then “The cheese that goes crunch!” until 1996 when it became “Dangerously cheesy!”

Throughout the ’80s and ’90s, TV ads consistently featured a theme where Chester Cheetah desperately attempts to eat other people’s Cheetos. The self-described “hip kitty” was often seen sneaking up on an unsuspecting stranger at a beach or public park. The result would always involve cartoon violence sometimes in the vein of the great traditional animation of Tex Avery, Bob Clampett and Chuck Jones as when directed by Keith Van Allen when he co-produced a series of spots for the South American market, (Chesterator, ala Terminator, Chester Piro as a wrestler, and Chester Bungee, as a bungee jumper form the highest peak imaginable). These spots for the first time brought Chester’s design back toward the classic 40’s and 50’s style, as well as combining hand-drawn animation with computer-generated backgrounds. Antics include Chester riding a motorcycle off a bridge, getting thrown to the top of a coliseum, or plunging miles through the air, only to unwittingly grab a hang gliding bodacious babe only to cast her aside in favor of Cheetos. Despite this, Chester did star in two video games for the Sega Genesis and Super Nintendo systems, Chester Cheetah: Wild Wild Quest and Chester Cheetah: Too Cool to Fool, released that same year. Chester Cheetah makes a cameo appearance in Archie Comics’ Sonic the Hedgehog series.

In the 2000s, Chester Cheetah, also referred to as Chester Cheetoh, became rendered as a computer-generated character in the United States, while he continues to appear in his old animation style in other countries. Contemporary TV ads have begun portraying him in a less antagonistic manner. One particular commercial series in 2006 had Chester defeating rival Chef Pierre, in a baking contest to create Baked Cheetos. This led to an advertising campaign titled Chester Goes Undercover, in which Pierre, disguised in silhouette, steals the Baked Cheetos recipe, and Chester gives chase by finding clues that lead him to Pierre’s minions Twisted McGee, Flamin’ Hot Fiona, and Cruncher. This is linked to an interactive Internet site. Upon confrontation with Chef Pierre, Agent X signaled all the agents to appear and Pierre and his minions were apprehended.

As of 2007, Cheetos has taken aim at an adult demographic with a recent series of ads featuring the mascot in promotion of OrangeUnderground.com. In this incarnation, Chester is physically a puppet, speaks with a mid-Atlantic accent and encourages people to use their Cheetos in acts of revenge or to solve problems (e.g. plug the nostrils of a snoring man or dirty the cubicle of a neat freak), sometimes referring to himself as “Papa Chester.” Chester is voiced by Adam Leadbeater.

Cheetos (formerly styled as Chee-tos until 1998) is a brand of cheese puff snack made by Frito-Lay, a subsidiary of PepsiCo. Fritos creator Charles Elmer Doolin invented Cheetos in 1948, and began national distribution in the U.S. The initial success of Cheetos was a contributing factor to the merger between The Frito Company and H.W. Lay & Company in 1961 to form Frito-Lay. In 1965 Frito-Lay became a subsidiary of The Pepsi-Cola Company, forming PepsiCo, the current owner of the Cheetos brand.

In 2010, Cheetos was ranked as the top-selling brand of cheese puffs in its primary market of the United States; worldwide the annual retail sales totaled approximately $4 billion. The original Crunchy Cheetos are still in production but the product line has since expanded to include 21 different types of Cheetos in North America alone. As Cheetos are sold in more than 36 countries, the flavor and composition is often varied to match regional taste and cultural preferences—such as Savory American Cream in China, and Strawberry Cheetos in Japan.